The recognition of the right to land, a historic demand by peasant movements, is gaining momentum at the international level. This publication takes stock of this major issue of our times. It is the result of major research and inquiry, and the fruit of close collaboration with La Vía Campesina. 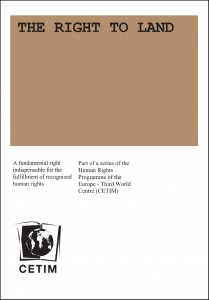 The recognition of the right to land is a major issue of our times, fundamental not only for all peasants but also for the rest of humanity, at a time when we are rediscovering the importance of peasants for food security and the fulfillment of the right to food, the conservation of biodiversity and the fight against climate change. Whereas hundreds of millions of peasants are still deprived of access to land or survive on tiny plots, others are daily evicted, and land grabbing is increasing.

The recognition of a right to land for peasants is more relevant than ever! And this historic demand of peasant movements is gaining momentum at the international level. It is discussed in the framework of the negotiations at the Human Rights Council (HRC) on a UN Declaration on the rights of peasants and other people working in rural areas.

This new publication of the CETIM takes stock of this issue. It is mainly intended as a support to the struggles of social movements and peasants organizations for the right to land, and in particular their efforts in favor of the recognition of this right at the UN. It constitutes a reference source that can serve as a tool for their mobilizations, campaigns or trainings.

This publication also intends to contribute to the training and information of all those engaged in favor of human rights as well as state representatives, UN and academic experts, as well as the general public.

The Right to Land is the result of major research and inquiry, and the fruit of close collaboration with La Vía Campesina. It explains why a recognition of the right to land is necessary and presents the main issues in rural areas from the perspective of agriculture and the right to food. Four peasant organizations from Colombia, France, Indonesia, and Zimbabwe, members of La Vía Campesina, present their struggles for the right to land as well the practices of their governments in land management at the national level. The text also analyzes in detail the content of existing instruments and presents specific examples of jurisprudence that plead in favor of a recognition of the right to land, at the international, regional and national level. Finally, several issues related to the content and implementation of the right to land are revisited, on the basis of the proposals formulated within the framework of the negotiations on the rights of peasants at the United Nations Human Rights Council.

The Right to Land was officially presented at a side event in Palais des Nations and a public conference in Geneva in February this year, with the presence of several representatives of peasant organizations members of La Vía Campesina.

The Right to Land is available in English, French and Spanish. It is available for free to social movements and organizations of the Global South. You can order this publication from the CETIM by email at contact@cetim.ch or by phone at +41 (0)22 731 59 63.  You can also freely download or consult it on the CETIM’s website (www.cetim.ch)

Find all the publications in the human right series here.

Read the interview with Federico Pacheco, leader of the SOC-SAT (Andalusia, Spain) here.