Interview with Federico Pacheco, leader of the SOC-SAT (Andalusia, Spain)

On the occasion of its presence in Geneva in November to participate in the informal consultations on the rights of peasants, the CETIM interviewed Federico Pacheco, leader of the Rural Workers Union in Andalusia (Spain) and member of La Vía Campesina, on the right to land.

Q.    Federico, could you tell me briefly about the origins of the demand for the right to land?

A.    These are struggles that date back many hundreds of years, and their roots lie in all those instances where peasants have been deprived of land by social and economic systems and for many other reasons. Even now, big landholdings, known as “latifundios”, still exist. Even here in Europe. In Andalusia, where I come from, they are centuries old. Big entrepreneurs or States or institutions of various kinds have seized land and enslaved the peasants.

And now, in addition to the inequalities to be found in the vast majority of countries around the globe, there’s this huge offensive by neoliberal capital, what we call “land-grabbing”, which means buying up millions of hectares, particularly in Africa but also in other countries, and on every continent.

In Europe, this phenomena takes particularly place in Eastern Europe, where they have just opened up land markets this year. Another important issue in Europe is the fact that, with the commodification of land, land has become a merchandise, a consumer good that can be traded in the marketplace.

One problem is how land use is changing. Anything to do with urban development or large infrastructure projects (useless projects, as we call them) or biofuels and other non-food products, or mining – most notably “fracking” – is ultimately very destructive, and all these actions are depriving peasants of the use of the land as such.

This means that small peasant farmers and also that landless workers are disappearing. And this at a moment when because of unemployment as it is, in Spain particularly, but more widely in Europe too, agriculture could be a mean of survival for a large sector of the population who have no work. So access to land is a basic requirement if peasant agriculture and a living rural world are to continue.

And this is the only realistic scenario to preserve the environment, prevent climate change and attain food sovereignty. In short, there will be no sustainable development if there is no peasant agriculture, and certainly not if we don’t put a stop to the system of industrial farming, which is destroying the planet. 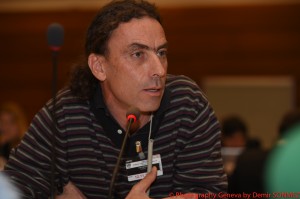 Q.    So the right to land is only a matter of guaranteeing access to land? Or are there other components?

A.    Well, on the one hand, if we’re talking about those large landholdings (“Latifundios”), it’s very important to establish access to land as a human right, that is to say to establish conditions that will guarantee anyone, peasants and other rural workers can have access to arable land. But the reality is exactly the opposite: what political and economic interests are doing is to throw people off the land so that they can keep it for themselves and prevent any peasant farming from taking place.

Given this situation, the human right to land must also include the right to hold onto land, guarantees of being able to remain on the land, and that entails security of legal tenure in order to prevent eviction and safeguard land use. Those would be the two main points.

A.    When we talk about access to land, the way the current system sees it is that the land is there, that it is a commercial good and that anyone can access it if they have money. In our view it is absolutely essential to recognize land as a right, and precisely not a commodity. For us land cannot be a commodity, it is a common good: it may well give rise to rights, but it is a common good. No one has the right to appropriate the land.

Historically, in struggles for the land, the discussion has been in terms of land reform, i.e., splitting up large properties or latifundios among peasants in accordance with various criteria. They are expropriated and shared out. But this has also propped up the system of land commodification. Within that capitalist market system the small peasant is forced to compete with the big agroindustry with no real support from the State in terms of seeds, machinery, taking produce to market, etc. Under this kind of system, you might have land but you can’t make a decent living off that land, or else you can survive by eating what you produce but you have no way to pay for a loan or buy machinery or sell your produce. 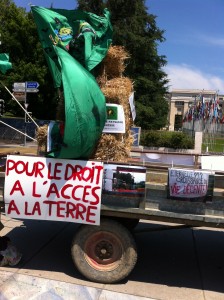 Thus historically the problem has been that the land that is shared out in agrarian reform comes back onto the market because the plots are sold and it is again concentrated in a few hands – companies or big landowners. Of course there are situations globally- among indigenous communities for instance – where there is a system of communal property, or a system of collective ownership that enabled the land to be kept under the control of peasants and its agricultural function to be maintained. But we believe that, in Europe in particular, there needs to be a system of access to land that prevents the peasant, whether individually or collectively as part of a cooperative, from disposing of the land as property, for sale or mortgage. That is, what is actually to be guaranteed is the use of the land. With restrictions on thy type of agriculture implemented.

So what we are asking for, and proposing in Andalusia and other places, is that States should have an obligation to place a sufficient quantity of land – by which we mean good quality, fertile, arable land, properly irrigated, not marginal land – at peasants’ disposal_: i.e., public holdings of farmland. We’re saying that at the State, Autonomous Community and municipality levels, there must always be a stock of land so that farmers and peasants can work.

In the past the concept of common land, grazing land, existed in Europe too, but now we think it’s essential that the State guarantee this, either in the form of public land, or by making available land expropriated using the same mechanisms as in agrarian reform. We’re talking about it as a public asset, i.e., land that is inalienable, that is outside the market, and that is made available for use by peasants who have proper guarantees and title and who know they have guarantees of use, usufruct and authorisation, always provided certain conditions are met, including provisions regarding the kind of agriculture permitted. That means, if it’s a public asset, there can be no planting of GMOs and no huge monocultures. We have to get back to peasant farming as it used to be, with traditional systems plus all the benefits of modern agroecology.

Q.    So in Spain does this public asset exist or is it still to be created from expropriations?

A.    No, what still exists in Spain and other countries in Europe is common land, common property that is increasingly coming under attack from those land-grab and privatisation policies. There are a certain number of land banks too that made public land available for sale or rent. What we are proposing doesn’t exist as such. There are still public lands in Andalusia, the result of a very superficial land reform in the 1980s. Some of that expropriated land – around 20,000 ha – is still there and two years ago the Andalusian Government, pleading the crisis and shortage of resources, auctioned it all off, i.e. privatised it.

So what we did was to occupy 400 ha of government land – the Somonte occupation, mainly- and we managed to halt the policy of privatisation. Well, in fact it’s still in place, it hasn’t been legally revoked, but in practice the land hasn’t been sold and we are fighting to ensure that the whole lot is placed at the peasants’ disposal, as public farmland. One of our proposals is that the Government should undertake to set aside a percentage of its annual budget – around 4% – for the purchase of more public land, so as to increase these public holdings, and also enforce a law on expropriation that is in fact already in place but is not applied, whereby all land that is underused or unused can also be expropriated and added to the common holding.

There is actually a tax on underused or unused land, enacted 30 years ago, but it isn’t levied. Such land is subject to a much higher tax, but in practice it isn’t applied: what the Government really wants to do is privatise those lands.

Q.    To conclude, the right to land is a necessary condition but not sufficient in itself without other rights to back it up. Is that correct?

A.    That’s right. Historically, we struggled for the right to land, and as soon as the peasants acquired the land they also got access to resources. In the past there were local economies where once a peasant got land they could survive and live. Nowadays, though, there’s patented seeds and privatised water. In the world we live in today, we can say, “No land, no peasants”. Meaning that you have to have access to the land and security of tenures. Plus it must be adequate land, quality land.

But it’s not sufficient because there is in fact a market, and for that you need machinery, tools, credit and you need to be able to sell your produce. And of course, if the State gives you land and says, “There you are, earn yourself a living”, as though you were some big firm, but then you have to pay for water, register with the health authorities, which costs a fortune, pay social security, sell to whoever issues your certificate, i.e., the big wholesaler, rather than selling directly, and so on, then all these factors build up until there comes a time when you’re no longer viable and in the end the small farmer exploits himself just to survive. So it is very important to have this support and this policy. As long as peasant agriculture and industrial agriculture have to exist side by side, there needs to be a differentiated policy. Otherwise peasants will never be able to survive and will disappear.