The second session of the intergovernmental group on the rights of peasants and other people working in rural areas was held in Geneva from 2-6 February 2015. A revised draft Declaration was presented. The new draft takes up most of the proposals put forward by peasants' organizations at the informal consultations in November 2014. A large delegation from La Vía Campesina and other organizations attended the meeting.

By way of background, the adoption of a United Nations Declaration on the rights of peasants is a proposal that originated with the international peasant movement La Vía Campesina, and the CETIM has been helping that group in its efforts at the UN since 2001. The campaign is being run jointly with FIAN International and with active support – notably logistic support – from Uniterre.

Following intensive awareness-raising actions and lobbying, in September 2012 we obtained a favourable decision from the Human Rights Council, which set up an intergovernmental working group to develop and adopt a United Nations Declaration on the rights of peasants and other people working in rural areas.

From 2 to 6 February 2015 the intergovernmental working group met in Geneva to consider a revised draft of the Declaration, prepared by the Chair of the working group, the Bolivian Ambassador to the UN in Geneva, based on the discussions at the first session and the informal consultations of November 2014.

A new success. The new draft takes up most of the proposals put forward by peasants' organizations, yet another victory for the campaign led by Via Campesina with the support of the CETIM and FIAN International.

Efforts were made in drafting the new text to use internationally agreed language as far as possible. This should facilitate negotiations and give States a more acceptable basis for their discussions.

Generally speaking, the new draft Declaration is longer and more detailed. There are 30 articles, as against 13 in the previous draft, and States' obligations regarding implementation of the rights have been specified in each article. In this way the Declaration will give greater prominence to rights that are in fact already recognized but are often poorly understood by those affected and indeed rarely observed. It will also pave the way for further substantive progress on these rights, and on States' obligations, so as to meet the needs of peasants and others working in rural areas, and address their particular situation.

Women's rights have been strengthened, with the inclusion of an article on rural women's rights and one on gender equality. The new draft Declaration also takes up another of the peasants' organizations' key demands in the form of a specific article on the right to food sovereignty. 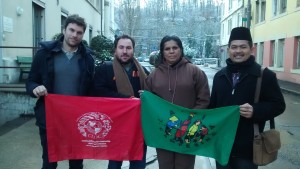 New rights? In addition, the majority of the rights that peasants had identified as key, such as the right to land, the right to seeds, the right to biodiversity and the right to productive resources, are maintained in the revised draft Declaration. Although they are not yet recognized to peasants in the human rights system, they are recognized in part to other groups of persons or under other international instruments, and should not be regarded as “new”. A good many of the proposals on these key articles of the Declaration submitted by peasants at the informal consultations have been included.

Thus the articles on the right to seeds and biodiversity establish peasants' right to use, grow, reuse, store, develop, exchange, transport, give away and sell their seeds. They also establish States' obligation to respect, protect and promote peasant seed systems, and to protect them against genetic contamination and biopiracy. The article on the right to the means of production is reinforced and includes the right to credit (not linked to property, which is very interesting), the right to tools, to technical support and to means of transport or transformation of peasants' produce. It also contains provisions on the promotion of agro-ecological production.

A large delegation. A large delegation from La Vía Campesina came to Geneva for the meeting, eight representatives in all, comprising two each from peasants' organizations in Asia, Africa, Latin America and Europe. Representatives from the International Federation of Rural Adult Catholic Movements (FIMARC), the World Alliance of Mobile Indigenous Peoples (WAMIP), the World Forum of Fisher Peoples (WFFP) and the International Union of Food and Agricultural Workers (IUF) had been invited and attended.

All these delegations were supported by the CETIM, not only in logistical terms but in particular in preparing the session (analysing the new text, drafting statements) and organizing different activities (meetings with delegates, side events).

The delegations played an active part in the working group meetings and were able to voice their proposals and demands with regard to the new text. They made numerous statements supporting the new text and putting forward proposals on the various articles. The emphasis was on the right to land and the right to a decent income (see boxes), and two side events were held on these points.

Overall States' reactions to the new text were positive and many of them made constructive contributions to the negotiations. It took longer than expected to prepare the new text and the delegations received it quite late (a week before the session started) and in English only, which rather complicated the discussions. But the new draft was given a first reading and numerous concrete proposals were put forward. The number of States actively involved is rising and positions on several key points are beginning to converge.

The attitude of the Western countries, however – with the notable exceptions of Switzerland and Luxembourg – continues to be less than constructive and they are making their wholehearted involvement in the process subject to unacceptable conditions. The United States and its closest allies are still disputing that there is even a need for a Declaration, and the European Union is opposed to the recognition of new rights for peasants. But cracks are beginning to appear even within the EU and behind the scenes there is a certain amount of criticism of this position, which is seen as not very constructive and too radical.