UN calls Colombia to account for attacks on SINALTRAINAL

Following action by CETIM, Human Rights Council special procedures have written to the Colombian Government to ask it to account for the numerous attacks on the SINALTRAINAL union, which is paying a high price for its struggle for workers’ rights: 25 of its members have been killed since 1986.

The communication, dated 12 December 2014 and signed by the United Nations Special Rapporteur on the rights to freedom of peaceful assembly and of association and the United Nations Special Rapporteur on extrajudicial, summary or arbitrary executions, makes particular reference to the many SINALTRAINAL union members killed, threatened or displaced, and reminds the Colombian Government of its obligations regarding the protection of human rights. 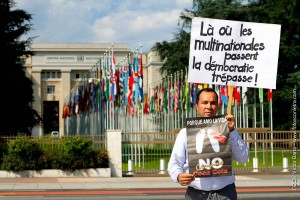 SINALTRAINAL represents workers in Colombia’s food industry, including workers in Nestlé and Coca-Cola. CETIM has worked with SINALTRAINAL for many years and helps it gain access to the United Nations human rights protection mechanisms in Geneva.

SINALTRAINAL is paying a high price for its struggle for workers’ rights in Colombia’s food industry: 25 of its members have been killed since 1986 and dozens have been threatened, attacked, displaced or exiled, or imprisoned on trumped-up charges. Colombia is the worst country in the world to be a trade unionist. Between 2000 and 2010, around 1,000 union leaders were murdered in Colombia. Two thirds of trade unionists murdered worldwide are in Colombia, and impunity prevails in 95% of cases.

“impunity prevails in 95% of cases”

In June 2014, CETIM submitted a written statement (case study) to the Human Rights Council on Coca Cola in Colombia. A representative of SINALTRAINAL came to Geneva to give evidence of the constant attacks on labor rights and trade union rights, and to denounce the murder of ten or more trade unionists and Coca-Cola’s alleged links with paramilitary groups.

In September 2014 CETIM sent the United Nations Special Rapporteurs on the rights to freedom of peaceful assembly and of association and on extrajudicial, summary or arbitrary executions three communications to alert them to the numerous attacks on SINALTRAINAL and to seek their urgent intervention with the Colombian Government.

The first communication related to the 25 SINALTRAINAL members killed with complete impunity, and requested the Human Rights Council special procedures to ask the Colombian Government to ensure that these crimes do not go unpunished and that their direct perpetrators and their instigators be brought to justice.

The second communication referred to the recent death threats against numerous SINALTRAINAL unionists and requested the special procedures to intervene to urge the Colombian Government to ensure their protection and physical safety.

Lastly, in its third communication, CETIM informed the Special Rapporteurs of several other attacks against the union, such as attempts to disband its local branches and outlaw its activities.

CETIM also requested the Special Rapporteurs to intervene with the Governments of the United States and Switzerland, where Coca-Cola and Nestlé are based, to ask them to put a stop to the companies‘ constant attacks on workers‘ and trade union rights in Colombia.

“urgent communication to the Colombian Government”

Following CETIM‘s action, the UN Special Rapporteurs on the rights to freedom of peaceful assembly and of association and on extrajudicial, summary or arbitrary executions sent an urgent communication to the Colombian Government on 12 December 2014. In their letter the Special Rapporteurs expressed concern about the alleged killings, attacks and intimidation against SINALTRAINAL members and recalled that the Universal Declaration of Human Rights and the International Covenant on Civil and Political Rights guarantee the right to life and safety of all individuals, as well as the right to freedom of association.

The communication to the Colombian Government mentioned in particular “the obligation to conduct thorough, prompt and impartial investigations into all suspected cases of extrajudicial, arbitrary or summary execution”, to “ensure effective protection for individuals and groups who receive death threats and are in danger of extrajudicial, arbitrary or summary execution”, and to “take appropriate measures to detain, investigate, prosecute and punish those responsible and make reparation for the harm caused by private persons or entities”.

In his report to the Human Rights Council in June 2015 (A/HRC/29/37/Add.5), the Special Rapporteur on extrajudicial, summary or arbitrary executions thanked the Colombian Government for its reply, but “regret[ted] not having received information on the status of investigations or the protective measures taken to ensure the safety of many of the trade unionists mentioned, [or] on whether judicial investigations have been launched into the deaths of two trade unionists, and a relative of one of them, mentioned in the communication”.

Also in his report the Special Rapporteur states that he is particularly concerned “about the unsafe environment in which many of Colombia’s defenders, trade unionists and social activists constantly operate and the high degree of impunity that prevails with regard to extrajudicial killings and death threats against them.”

CETIM is following this case closely and will continue to support SINALTRAINAL‘s struggle for the rights of food industry workers in Colombia. At present it is working on a further communication to the United Nations Special Rapporteurs, and preparing a complaint against Colombia to the Human Rights Committee regarding that State’s responsibility in respect of the murder of a SINALTRAINAL member who worked for Coca-Cola. 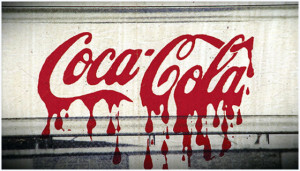 Responsibility of multinationals: where is Switzerland going?