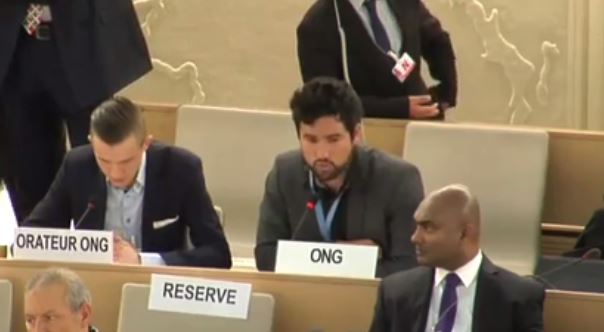 During the first half of the year, the CETIM addressed the plenary of the Human Rights Council twice. Once regarding the violation of human rights in Brazil, the second time to denounce the situation in Colombia since the signing of peace agreements.

The 37th session of the Human Rights Council was held from 26th February to 23d March 2018. The CETIM, supported by IADL, TNI, ITUC CSI IGB [Is this all one acronym?], Friends of the Earth International and FIAN, issued a statement calling on the Brazilian government to respect its international and national obligations by repealing all laws that violate the constitution, international human rights law and the fundamental rights of the Brazilian people. In Brazil, the institutional coup, which overthrew President Dilma Rousseff in 2016, installed an interim government whose modus operandi has been to secure the power of conservative and neo-liberal forces, opening the economy to the activities of transnational corporations to the detriment of the national protection framework by dismantling public services and leaving unprotected the vulnerable sections of the population.

This is leading to a situation of democratic exceptionalism, with serious setbacks in the protection of human rights, contributing to the undoing of the progress achieved in the last decades since the end of the military dictatorship. Soon after taking interim power, President Temer closed the Ministry for Human Rights, the Ministries for Women’s Equality and Race Equality and the Ministry for Agrarian Development.

The CETIM and its partners urged the international community and the Human Rights Council to intensify their attention to this country in order to prevent the aggravation of this crisis and to guarantee the return to institutional normality in Brazil.

With regard to Colombia, CETIM spoke on behalf of its partner La Vía Campesina. The latter played a very important role in the peace agreements and has had official observer status on the issue of agrarian reform, a fundamental pillar for ensuring lasting and global peace.

During its mission at the end of November 2017, the La Vía Campesina delegation noted that the peace agreements have been welcomed with hope and relief.

However, disappointment and discouragement are noticeable because the commitments made are not materializing on the ground. It is mainly the rural populations and communities that do not see improvements: agrarian reform is not advancing, promised land is not being made available or its possession legalized, pressure on land by industrial agriculture and mining is increasing. Law enforcement against producers of illicit crops remains violent without any co-ordinated effort to find substitutes for them. Access routes for the marketing of agricultural production are insufficient, and the lack of health infrastructure is striking. Insecurity is increasing, and more than 150 community and peasant leaders, trade unionists and ex-combatants have been murdered since the agreements were signed.

In view of this situation, the CETIM called on the Human Rights Council and the Office of the High Commissioner for Human Rights in Colombia to ensure the implementation of the peace agreements with all necessary vigour.

The texts of both statements can be consulted on the CETIM here.