Systematic violence against peasant organizations in Colombia denounced at the UN

Geneva, March 3rd, 2021 – “In Colombia, one social leader is killed every 41 hours”, denounce FENSUAGRO and the CETIM before the UN Human Rights Council.

Nury Martinez, president of the Federación Nacional Sindical Unitaria Agropecuaria (FENSUAGRO) of Colombia – a member organization of La Via Campesina (LVC) – addressed the plenary assembly of the 46th session of the United Nations Human Rights Council to denounce the systematic violence and repression against peasant organizations in Colombia, as well as the non-compliance with the Peace Accords and the continuing state and paramilitary violence against social leaders. In this regard, “five years after the Peace Accords, more than 1,000 social leaders have been killed, mostly peasants, indigenous and Afro-descendant communities, indicating that in Colombia, one social leader is killed every 41 hours”, Nury Martinez notes. 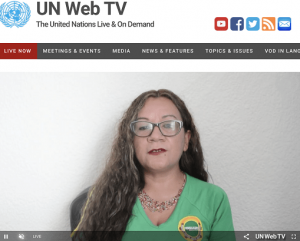 It should be noted here that the report in question echoes the concerns of social organizations and movements on the ground, in that it refers to “the lack of progress in the adoption of a public and criminal policy – as foreseen in the peace agreement – to dismantle criminal organizations, including those referred to as successors of para-militarism and their support networks”. In light of this, the Office of the United Nations High Commissioner for Human Rights in Colombia reiterates the urgency of proceeding with the dismantling of para-militarism.

In his intervention, Nury Martinez highlights the particularly violent repression against peasants and against his organization: “Since its foundation, FENSUAGRO has been subjected to various forms of harassment, more than 700 of our affiliates have been killed or disappeared; there is a high level of under-reporting because the victims do not denounce as they are afraid of reprisals. We know that they are paying to murder peasants who try to return to their land”.

The Colombian State is de facto responsible for these violations and must comply with its national and international human rights commitments: these are the basic conditions for the construction of an effective and lasting peace for the Colombian people. In light of the above, Nury Martinez urged the Human Rights Council to demand that the government promotes, among other things, “structural changes that address the historical causes of the armed conflict: the problem of land, poverty and social exclusion in rural areas,” but also “to abolish para-militarism” and “to commit to the UN Declaration on the Rights of Peasants and other people working in rural areas”.

Read the full text of the intervention in Spanish

CETIM and FENSUAGRO had already collaborated on a case study on the Colombian situation presented in the publication “The right to land” (Ed. CETIM, Geneva, 2014, Collection “Human Rights Series“) available in three languages free of charge.