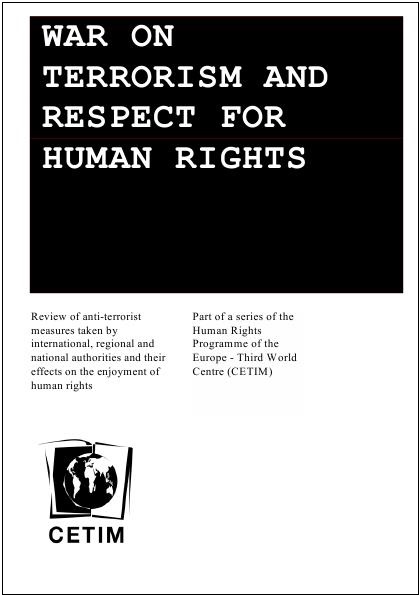 War on terrorism and respect for Human Rights

Since the beginning of this new millennium, terms such as terrorist, terrorism, fight against terrorism, etc. are part of everyone’s daily life even if nobody knows exactly what is hidden behind such terms, or whether they are used adequately or not …

Since the beginning of this new millennium, terms such as terrorist, terrorism, fight against terrorism, etc. are part of everyone’s daily life even if nobody knows exactly what is hidden behind such terms, or whether they are used adequately or not.

Moreover, in the name of the sacrosanct “fight against terrorism”, anti-democratic and clearly attempting to freedoms measures (video surveillance, telephone hearings, monitoring of private electronic mails…) are imposed, even in so-called democratic countries, in an atmosphere of fear often artificially created or quickly exploited. Even worse, the resort to practices of torture, killings and/or forced disappearances are admitted by “big democracies” to save “innocent lives” while this antique practices are officially banned after decades in these countries and prohibited by international conventions.

In such a climate and with this kind of expeditious methods, human rights are violated, the State of law often mocked and the presumption of innocence forgotten. It is a situation “dreamt of” by certain governments, that hide themselves behind the “terrorist”, threat to get huge military and security budgets approved to the detriment of social budgets, to repress social and political struggles – often qualifying them of “terrorist” -, etc.

This brochure does not intend to deal with all aspects of an extremely complex and highly controverted subject. It has four chapters:

the first one tackles definition of terrorism and the need to make a distinction between the latter and national and social liberation struggles.

The second chapter give some examples of State terrorism in the recent past, since this aspect is in general the big absent in the debates when it is not manipulated by the powers uniquely to blackmail and mobilize the public opinion.

Chapters third and fourth are dedicated to the present situation as regards the treatment of this matter in international and regional instances. In Chapter III, we have deliberately chosen Western Europe and the United States to ex­amine the impact of the so-called anti-terrorist measures at a national level. There are three reasons for this. Firstly, these countries, “home of human rights and democracy”, slip dangerously towards regimes disrespectful of such values though they pretend the contrary. Secondly, although if refugees and migrants are particularly targeted in these countries, such measures affect also their own residents. Thirdly, given these countries’ domination position in the world, the measures taken have a pernicious impact not only on human rights in general and the right to self-determination of peoples in particular, but also on the humanitarian international law and the criminal justice systems.

The phenomenon of terrorism, with social, political, ideological and economic implications, must be studied in all its forms and only then we will be able to face it efficiently, fully aware of it.