The UN asks Guatemala for explanation over repression against CODECA

In a joint written communication dated April 7th 2014, the UN Special Rapporteur on freedom of expression, the Special Rapporteur on freedom of association and assembly and the Special Rapporteur on the situation of human rights defenders, asked Guatemala to explain the crackdown against the Comité de Desarrollo Campesino (CODECA). This was revealed during the last session of the Human Rights Council in September 2014. The communication was issued in response to a letter from CETIM asking for the urgent intervention of the Human Rights Council’s Special Procedures in order to end the repression against CODECA. The Government of Guatemala has so far not responded to this urgent communication.

CODECA is a peasant organization in Guatemala that fights for justice and better living conditions in rural areas. The CETIM has been working with CODECA for many years and has supported it in its efforts at the UN to raise awareness of the situation in rural areas in Guatemala and use the human rights protection mechanisms.

CODECA has been undergoing a fierce crackdown since the beginning of the year, following a number of protests against the privatization of electricity in Guatemala – which benefits the transnational corporation Energuate to the detriment of the local population. In March 2014, following a peaceful demonstration calling for the nationalization of electricity, several members of CODECA were beaten and threatened with death by unidentified individuals. A number of CODECA leaders were also arrested. The Guatemalan government has a direct involvement in this since many of its members, and in particular President Otto Perez Molina, have publicly accused CODECA of stealing electricity and of money laundering, and have called for their arrest. 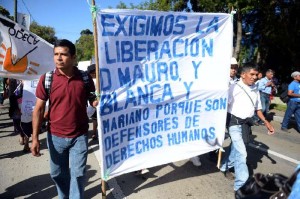 The Government of Guatemala has so far not responded to the urgent communication it received from the Human Rights Council’s Special Procedures. Furthermore, repression has even increased in recent months. Many members of CODECA, including its president Mauro Vay, have been arrested and detained since August 2014. Also in August, three CODECA members were killed and 60 others injured in clashes with police.

The CETIM is closely following those developments and will continue to support the struggle of CODECA for human rights in Guatemala.