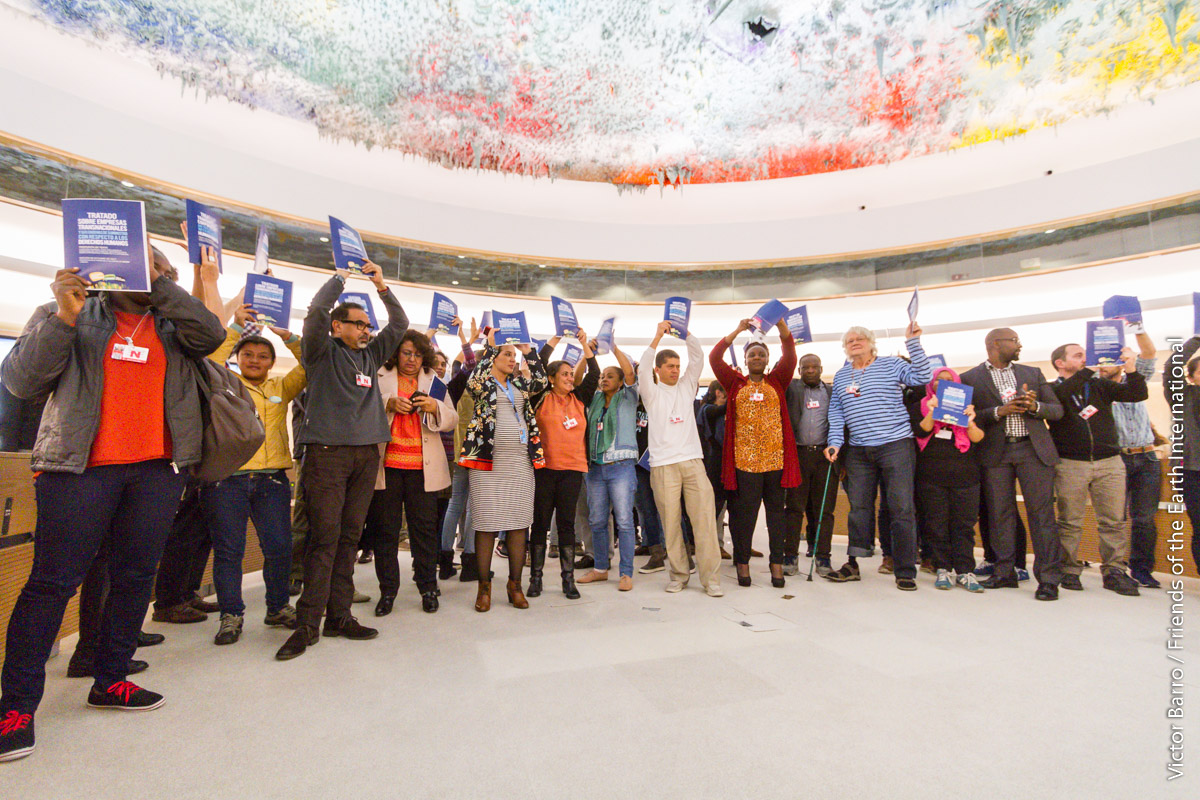 The chair of the intergovernmental working group entrusted with drafting a legally binding instrument on transnational corporations (TNCs),1 Guillaume Long, Ambassador of Ecuador, presented the “elements” that will serve as a basis for drafting the instrument. In parallel, the Global Campaign to Dismantle Corporate Power and Stop Impunity (Global Campaign), of which the CETIM is a member, submitted its own draft treaty to the working group.

The Human Rights Council’s intergovernmental working group on TNCs met in Geneva from 23 to 27 October 2017 for its third session. Participating in its work were some 100 state delegations and 200 civil society representatives. The Global Campaign to Dismantle Corporate Power and Stop Impunity2 was represented by some 130 delegates (from all continents), to make their demands heard.

The discussions within the working group were organized in panels corresponding to the various chapters of the “elements” presented by the group’s chair. Experts (lawyers, economists, academics, militants, representatives of victims etc.) including the CETIM’s director, Melik Özden, were invited to take the floor at each of these panels, to launch the discussion.

The discussions focused in particular on the obligations of TNCs and states regarding human rights, access to justice for victims, jurisdiction (shared between a TNC’s home state and the host state) and the setting up of an international tribunal for TNCs and international cooperation.

Within this framework, the Global Campaign presented its own draft treaty in order to influence the working group’s negotiations (see inset). The Global Campaign members were active both within the United Nations – with concrete proposals presented in some 100 oral interventions and through three parallel conferences – and outside the United Nations, holding numerous thematic workshops over three days in a tent on the Place des Nations. The CETIM, with its partner members of the Global Campaign also organized a public conference at the University of Geneva.

In parallel, the CETIM, in collaboration with Professor Gilles Lhuilier, presented commentaries on the chair’s “elements”. In our commentaries, we insisted on the following points: the importance of the scope of application of the future treaty (it must apply directly to states and to TNCs); the obligation of TNCs to protect human rights in the context of their value chain with, among other things, the drafting and implementation of a vigilance plan; the setting up of an international legal assistance service to facilitate access to justice by victims of TNCs; the exercise of jurisdiction of states for violations committed all along the value chain of any TNC, even when its affiliates constituting this chain operate outside their jurisdiction.

Throughout the week, the European Union representative attempted to thwart the smooth running of the working group, at the risk of breaching diplomatic protocol – without success.

It should be noted that political support of the drafting process has broadened. For example, 200 members of parliament from 20 countries committed themselves to supporting the process in a declaration issued by a parliamentary forum held in Geneva on the eve of the opening of the session. In France, 250 members of parliament have written to the president requesting that France support the drafting process.

The Global Campaign is already a step ahead of the working group, for its treaty is already drafted. It is the fruit of a long collective effort, all the members of the campaign having contributed. Thus, it reflects the struggles and demands of the affected communities, of social movements and of other civil society organizations involved in this process. Having a treaty emanating from the Global Campaign has been a powerful negotiating tool. This treaty is a gold mine of information, reflections and proposals. It can be used by both militants and public organizations and elected officials who are fighting the impunity of TNCs. It will continue to evolve in function of negotiations at the United Nations.

The main proposals of this treaty are as follows: direct and clear human rights obligations of TNCs; the recognition of joint liability for human rights violations shared by the primary TNC, its management and the business enterprises constituting its value chain. Next, there are states’ obligations, including the main one of reaffirming the primacy of human rights over investment and trade agreements, as well as the obligation to consult affected communities with a view to obtaining their consent before the installation of a TNC on their land. The courts of the home states will have broad jurisdiction over TNCs and their value chains to prevent them from escaping from the rule of law. The treaty also contains a chapter reinforcing international cooperation in the areas of investigation and the implementation of judgments.

It proposes the setting up of an international tribunal on TNCs and an international monitoring center. As their statutes are not yet drafted, this will be the next participatory drafting process for the Global Campaign. And, of course, the CETIM will be contributing to it!

2It comprises more than 200 civil society organizations from across the world (in particular social movements and affected communities.