External debt continues to be a burden for most countries of the Global South, but now also for many countries of the Global North.1 One new development is that the major creditors are no longer public bodies but are mainly private. According to UN figures, “Long-term debt represented approximately 72 per cent of total debt stocks in 2013, as in 2012, and was mainly owed to private creditors (…) The share of short-term debt increased from $1.26 trillion in 2011 to $1.35 trillion in 2012, reaching $1.5 trillion in 2013.”2 Of this amount, “foreigners now hold $1 trillion of government debt of developing and transition economies, excluding foreign official loans.3 About half of this was incurred in the period between 2010 and 2012, mostly through inflows from foreign asset managers, attracted by large interest rate differentials with advanced economies.”4

This situation gives immeasurable power to those private creditors including those entities known as “vulture funds” which are only interested in siphoning off public resources by various means, including legal ones (see panel). How does that work? “Vulture funds buy debt, often at huge discounts, with the intent of suing the debtor for full recovery. Vulture funds have averaged recovery rates of about 3 to 20 times their investment, equivalent to returns of (net legal fees) 300%-2000%. The vulture fund’s modus operandi is simple: purchase distressed debt at huge discounts, refuse to participate in restructuring, and pursue full value of the debt often at face value plus interest, arrears and penalties through litigation, if necessary.”5

This is the bitter experience of several states among which the most famous case is that of Argentina (see panel). So it is no coincidence that Argentina, with the support of many other states, has launched a campaign against vulture funds, calling for “a multilateral legal framework for sovereign debt restructuring operations”. Last September, Argentina had two significant resolutions passed at the UN. Here is a brief summary.

On 26 September 2014, the Argentine Foreign Minister Héctor Marcos Timerma, went to Geneva to present, in person, a draft resolution on vulture funds to the UN Human Rights Council (HRC). This draft resolution asserts, from the outset, the link between external debt and poverty, and also development as follows: “the debt burden contributes to extreme poverty and hunger and is an obstacle to sustainable human development, to the realization of the Millennium Development Goals and to the right to development, and is thus a serious impediment to the realization of all human rights.” 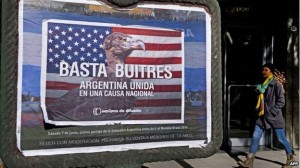 According to this the draft resolution, “the international financial system does not have a sound legal framework for the orderly and predictable restructuring of sovereign debt, which further increases the economic and social cost of non-compliance.”

It deplores the fact that vulture funds “through litigation and other means, oblige indebted countries to divert financial resources saved from debt cancellation and diminish the impact of, or dilute the potential gains from, debt relief for these countries, thereby undermining the capacity of Governments to guarantee the full enjoyment of human rights of its population.”

Moreover, the draft resolution, noting the flaws and the unfairness of the global financial system “calls on States to consider the establishment of legal frameworks to restrict the predatory activities of vulture funds that fall within their jurisdiction.” 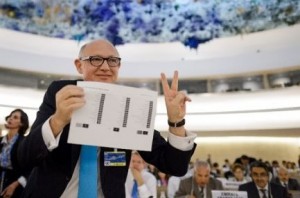 With this draft resolution, the Human Rights Council gave its Advisory Committee (a panel of independent experts) the task of preparing a report on the impact of vulture funds on human rights. The draft resolution was adopted by 33 votes to 5, with 9 abstentions, despite by the US to prevent it being approved.8 According to the US, the adoption of the resolution is a threat to the stability of international financial institutions and to development aid to the South. It is interesting to note that the traditional allies of the US on this issue, such as France and Italy, who generally vote against any resolution on external debt at the Human Rights Council, arguing that it is a matter that should be discussed by the IMF and the World Bank, abstained.

While the Human Rights Council was meeting in Geneva, the UN General Assembly ended its 68th session in New York during which an important resolution, submitted by Bolivia on behalf of the G77 and China, was also adopted on the same subject. In the opinion of these countries “vulture funds should not be allowed to paralyse developing countries’ efforts in this area, and that their claims should not take precedence over a State’s right to protect its people under international law”. They also expressed concerns about the fate of Argentina because, they say, “Today it is Argentina, but many developing and developed countries have suffered in the past from the exact same predatory behaviour, and others will follow if we do not act.”9

This resolution followed on from the report of the Secretary-General, published in July 2014 which, by analyzing the Argentine case reveals the flaws in international arrangements for external debt: “The case of the Republic of Argentina v. NML Capital Ltd. has demonstrated the complications that may arise in the absence of an international debt workout mechanism. The international ad hoc arrangements for debt crisis resolution have created incoherence and unpredictability. Different courts have very different interpretations of the same contractual clause and can impose a wide array of rulings. Politics and interest groups can impact on the outcome of the rulings and debt restructuring, compromising consistency and fairness. The Republic of Argentina v. NML Capital Ltd. rulings have made future debt restructuring more difficult as debtors are left with only moral suasion and foreign relations as incentives to encourage creditor coordination.”13

It is in this context that resolution 68/304 was adopted by the General Assembly on 9 September 2014, by 124 votes to 1114, with 41 abstentions15. With this resolution, the General Assembly decided to “to elaborate and adopt through a process of intergovernmental negotiations, as a matter of priority during its sixty-ninth session, a multilateral legal framework for sovereign debt restructuring processes (…). It also decided to “to define the modalities for the intergovernmental negotiations and the adoption of the text of the multilateral legal framework at the main part of its sixty-ninth session, before the end of 2014.”

As CETIM has already stated on many occasions, and as is now widely accepted, debt is a major obstacle to development in countries of the South and the implementation of economic, social and cultural rights. It even poses a threat to the economies of countries of the North, as has happened several times in recent history16, and since 2008 has continued to be the case in several European countries. Only by carrying out a comprehensive audit of public debt, as a first step, will it be possible to see the problem more clearly, act accordingly and avoid the spiral of debt. This is what the government of Rafael Correa in Ecuador decided in 2007-2009. That is why CETIM has been campaigning for more than two decades for audits to be carried out, to establish the legitimacy of the loans being made, the identity and responsibilities of debtors and creditors, as well as the source of the funds. These audits should also provide answers on how the loans are used, and what conditions apply. CETIM, in collaboration with the CADTM (Committee for the Abolition of the Third World Debt) and other organizations, has just published a new book on debt, which could serve as a guide for social movements, citizens and elected officials in how to conduct audits.17

1 Note that the trend in many countries is that domestic debt is also on the increase, which remains the major concern.

3 According to the same report, at the end of 2012, “foreign central banks held only between $40 billion and $80 billion of government debt of developing and transition economies out of about $1 trillion held by foreigners.” A/69/167, §40.

17 An introductory manual for the organization of debt auditing in countries of the South, which was published in three languages (English, French and Spanish) in 2006, quickly sold out (Let's launch an enquiry into the debt! A manual on how to organise audits on Third World debts jointly published by CETIM and CADTM.) https://www.cetim.ch/fr/publications_ouvrages/140/let-s-launch-an-enquiry-into-the-debt-a-manual-on-how-to-organise-audits-on-third-world-debts A new updated version with other examples, including Ecuador, is currently only available in Spanish: Auditoría Ciudadana de la deuda pública – Experiencias y métodos; jointly published by CETIM and CADTM. The English and French versions are in preparation.

19 See the contribution by Tim Jones, 28th October 2014, to the CADTM seminar on vulture funds, http://cadtm.org/Que-peuvent-faire-les-Etats-pour,10871