Repression and violations of the rights of peasants in Peru 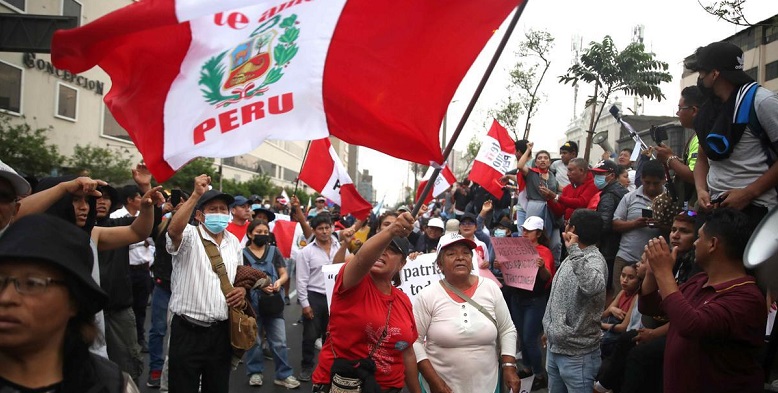 As a long-standing ally of La Via Campesina (LVC) in the struggle for peasants’ rights around the world, CETIM shares the statement of LVC’s Latin American Coordination of Rural Organisations (CLOC) on the widespread and systematic violations of peasants’ rights currently taking place in Peru.

Following the controversial removal of President Castillo, the regime of Dina Boluarte has implemented an unacceptable wave of repression, abuse of force and human rights violations against peasant communities, indigenous peoples and other members of Peruvian civil society who have legitimately exercised their right of association and political expression.

This attempt to criminalize and delegitimize peasant mobilisations through arbitrary arrests and violent repression severely infringes in particular the rights of peasants enshrined in the United Nations Declaration on the Rights of Peasants (UNDROP). Through its actions, the Boluarte regime is also violating Peru’s international human rights commitments.

It should be stressed that the authoritarian regime of Dina Boluarte represents the particular interests of the national and international economic and financial elites that seek to keep the country under their domination. Indeed, Peru is a highly strategic country for the interests of transnational corporations, as its soil is one of the richest in the region in terms of natural resources. Moreover, since Fujimori’s neoliberal turn in the 1990s, the country’s economic apparatus has been completely privatised and economic policy placed under the supervision of international economic and financial institutions. Therefore, the current situation in the country must be analysed in the light of the strategy of the dominant elites to oppose the attempts of progressive forces to resume the democratic process, based on social justice and popular sovereignty.

In this perspective, CETIM expresses its solidarity with the peasants and all victims of the reactionary violence in Peru. CETIM, in close collaboration with LVC and Peruvian rural and indigenous organisations, will address the UN human rights mechanisms in order to put an end to these violations.

Read the statement of CLOC-LVC here 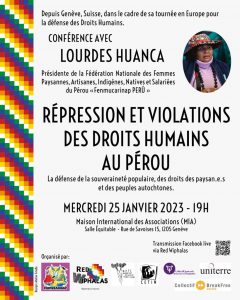