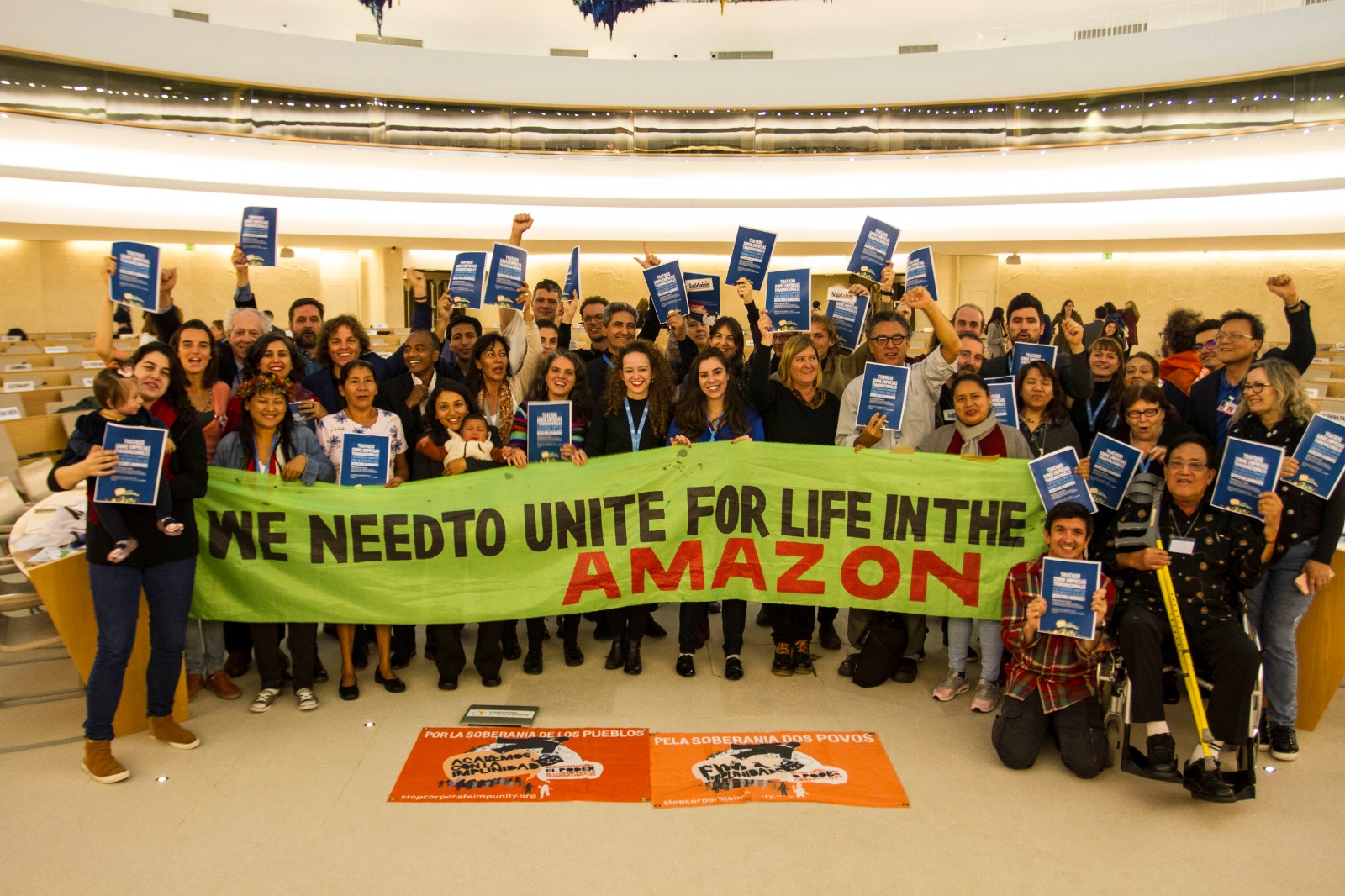 The 5th session of the UN intergovernmental working group in charge of drafting a binding treaty to regulate the activities of transnational corporations (TNCs) took place in Geneva from 14th-18th October 2019.

The working group got to down to business with a presentation of the revised version of the draft treaty by the Presidency, held/carried out by Ecuador. Many national delegations and civil society organisations commented on the draft.

The CETIM, as a member of the global campaign and in close cooperation with it, actively participated in presenting a number of amendments, despite the presidency’s attempt to sideline civil society at the start of the working group.

Unsurprisingly, the debates in the working group were partially focused on the scope and the responsibility of TNCs within the framework of the future treaty. Some states (Ecuador, Spain and Mexico among others) as well as TNCs lobbies supported broadening the scope to all businesses as proposed in the revised version of the draft. While France supported this position, it also acknowledged that the proposed demands would be untenable for small companies. For Argentina national companies are already subject to national law. Most states (in particular the African Union) rejected broadening the scope to all businesses and called for the mandate of the Working Group, namely exclusively targeting TNCs and other businesses of an international nature, to be upheld. Russia and China tabled a number of amendments and expressed their concerns about the content of some articles.

According to our analysis, the content of the revised project falls very short of resolving the problems raised by TNCs and does not take into account most of the claims made by the affected communities. The revised project actually contains many inaccuracies and creates confusion about the scope of the future binding treaty which is extended to any type of business. The joint, solidarity-based responsibility of parent companies for the breaches committed by entities in their value chains is also not outlined. The aim of these changes was to render the future treaty meaningless. The ability of TNCs to bypass national jurisdictions and evade democratic and legal checks are real underlying reasons. It needs to be remembered that these drastic changes meet the needs of certain stakeholders who have vigorously contested the drawing up of this treaty (TNCs lobbies and some powerful states).

Regarding the obligations outlined in the draft, they are essentially borne by the nation state. As we all know, in the current context of neoliberal globalisation, no state can monitor the activities of TNCs alone, given their economic and legal versatility across borders.

Thus the revised draft is moving dangerously away from the original spirit of resolution 26/9 which set the mandate for the working group. Such a draft waters down the initial aim of the negotiation process, namely the legal framework of the transnational activities of private entities which breach human rights and cause irreversible environmental damage.

Furthermore, the Brazilian delegation tried to oust civil society from the negotiation process by tabling a formal proposal to this effect at the end of the week. This attempt was unsuccessful thanks to strong opposition from the members’ states of the non-aligned movement.

After the debates, the working group asked its chair to table a new revised version of the draft treaty to be submitted at the 6th session.

For the CETIM and the global campaign, it is obvious that the new version will have to state the obligations of TNCs and other business of a transnational nature if we want to prevent human rights violations and ensure access to justice for communities and people affected by these entities.

We will continue to campaign for some key elements to be retained in the draft treaty such as the rights of affected communities and people, joint solidarity-based TNCs responsibility (parent companies) with their value chain from a civil, penal and administrative perspective, the question of jurisdiction (state of origin, host state and forum necessitatis), an international implementation mechanism which is efficient and effective and so on. We call for the inclusion of grassroots claims and proposals. For us, the future treaty absolutely has to guarantee access to justice for affected communities, regulate TNCs activities in a binding way and clearly reaffirm the supremacy of human rights in all economic and trade agreements.

There is a fight for social justice and against the impunity of TNCs going on in the working group. The CETIM and the global campaign will continue with their efforts to contribute to putting in place an effective and efficient legal framework to regulate the activities of these entities. We are building international law from the bottom up.