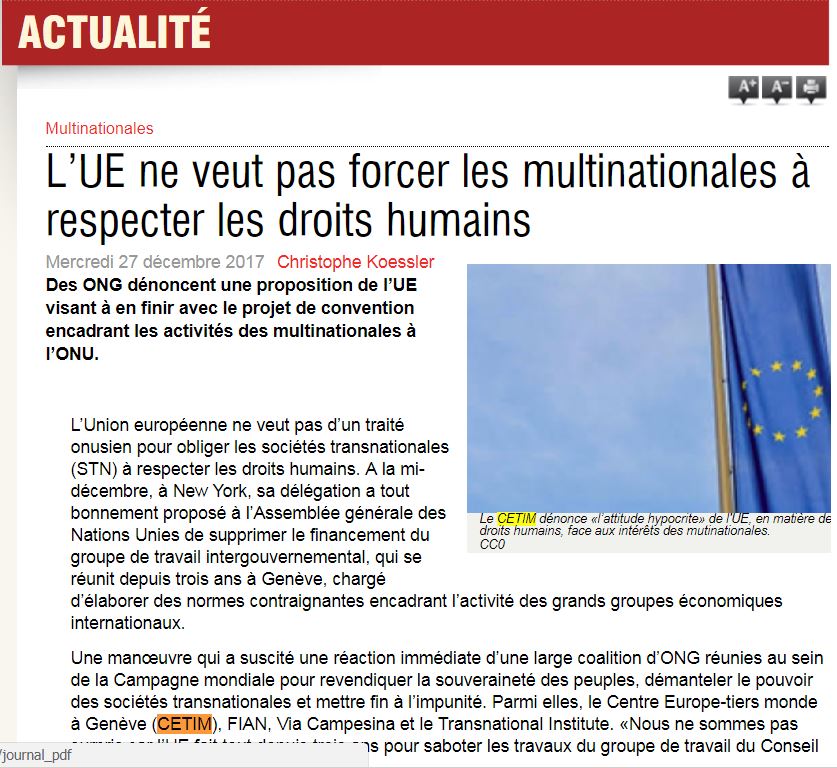 The European Union persists in sabotaging the work of the inter-governmental group responsible for drafting a legally binding instrument on transnational corporations. Le Courrier published an article on this subject in its edition of 27 December 2017. Here it is in its entirety.

NGOs denounce an EU proposal to end the United Nations project of a convention regulating the activities of multinationals.

The European Union does not want a United Nations treaty to oblige transnational corporations (TNCs) to respect human rights. In mid-December, in New York, its delegation had quite simply proposed to the United Nations General Assembly that the funding of the intergovernmental working group, which had been meeting for three years in Geneva to draw up binding standards governing the activities of major international economic groups, be terminated.

This move provoked an immediate reaction from a broad coalition of NGOs united within the Global Campaign to claim the sovereignty of people, dismantle the power of transnational corporations and put an end to impunity. Among them, the Centre Europe-tiers monde in Geneva (CETIM), FIAN, Via Campesina and the Transnational Institute. “We are not surprised because the EU has been doing everything for three years to sabotage the work of the United Nations Human Rights Council working group. But we must sound the alarm and denounce the hypocritical attitude of the institutions in Brussels, which on the one hand call for respect for human rights, and on the other sabotage initiatives in this direction when they conflict with the interests of their multinationals”, says Melik Özden, Director of CETIM.

For the time being, however, the United Nations intergovernmental working group on TNCs is not in danger: “It is unlikely that a consensus will emerge in the General Assembly’s Committee on Budgetary Questions to cut its funding,” explains Melik Özden. In 2018, at the next session, a formal draft treaty should be presented.