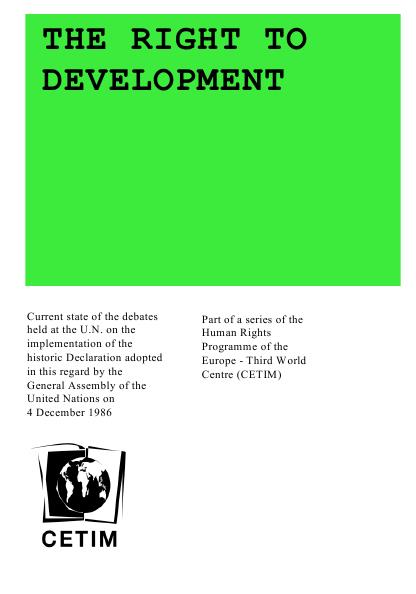 The right to development

The last decade has been marked by an unprecedented increase in inequal­ities and a spectacular growth of the gap between “developed” countries and those of the Third World as well as the growth of a gap within countries them­selves. This is attested to by reports from the United Nations, by international conferences and even by the international financial institutions. This catastrophic increase in poverty and inequality makes it imperative to promote and implement the Declaration on the Right to Development.

Adopted by the U.N. General Assembly in 1986, this declaration appears as a sort of final offspring among the efforts undertaken by the non-aligned movement of the 1960s and 1970s, when it still had the power and conviction to pursue cogent militancy in favor of a new international economic world order more just and more equitable.

Although the Declaration has never really been implemented, it retains all its legal, political and moral pertinence.
The Declaration on the Right to Development constitutes an international instrument of primary importance, for it asserts the right to development as a human right in all its dimensions and unequivocally clarifies the principles that should regulate international relations, all in a spirit of equality and mutual re­spect tending toward its full realization. It emphasizes collective rights, the right of peoples to choose their own development model, and insists on inter­national cooperation among countries, a cooperation which is not reduced to simple international aid, even though such aid may be deemed “essential” (Art. 4, §2). In this regard, it constitutes, overall and along with the corpus of human rights instruments, a further instrument for peoples in the struggle against neo-liberalism.

The purpose of this brochure is to present the Declaration on the Right to Development – still largely unknown among most civil society organizations – and relate the evolution of the discussions and what is at stake in its regard within the U.N. human rights instances, all while examining the perspectives it opens.