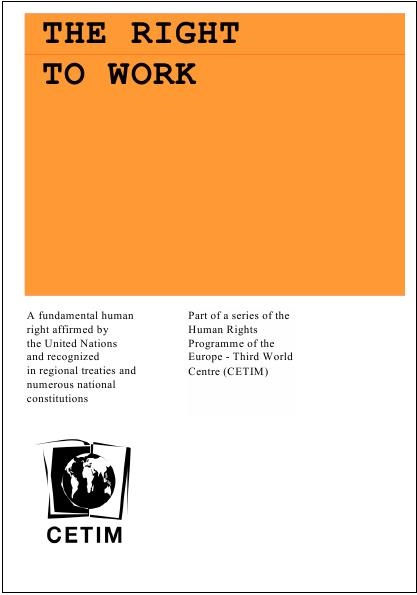 The right to work

Work is essential for everybody in the organization of contemporary society. It not only contributes to the formation of the individual, but it is also ne­cessary if one is to be able to support oneself and one’s family, make and keep social contacts and fulfill one’s duties .

Work is essential for everybody in the organization of contemporary soci­ety. It not only contributes to the formation of the individual, but it is also ne­cessary if one is to be able to support oneself and one’s family, make and keep social contacts and fulfill one’s duties toward society.
However, in our times, work, for hundreds of millions of persons, has be­come a rare experience or a source of suffering or danger for those who are “lucky enough” to work.
However, for more than a century, labor law (labor relations and working conditions) has been codified, and employment policies have been drafted within the ILO. Of course, these regulations have allowed a definite improvement in working conditions in certain regions of the world, in particular in Europe during the period following the second World War (often referred to as the thirty glorious years). Nonetheless, even this part of the world is not free from the problems cited above, and it is in full regression in these areas (v. Chapter III.B).
The source of these problems can be found in the organization of produc­tion and the orientation of economic policies. Three decades of neo-liberal policy, implemented on a world-wide basis and called globalization, have ex­acerbated the continuing crises. By putting workers as well as countries in competition with each other, and by excluding more and more of economic policy making from the arena of political activity (where some sort of demo­cratic oversight is possible), neo-liberal globalization has had a detrimental and regressive effect on legislation regulating labor relations, with a concom­itant weakening of the union movement.
In this context, if labor law is known to all, the right to work is less known. The legal regulation of labor relations is extremely important, but the requisite to enjoying that right is a job.
The right to work, recognized at the international level and in most national legislation, corresponds to this requisite. As a human right, it brings to the dis­cussion of these questions a dimension rarely encountered and not taken into account in the drafting of policies and strategies intended to fight unemploy­ment and underemployment.
The present brochure aims precisely to clarify this dimension, without neg­lecting labor rights.
Thus, the brochure presents the effects of globalization on the right to work and labor rights (Chapter I); the content and the scope of the right to work and its corollaries; the pertinent norms at the international and regional level (Chapter II); the obligations of governments as well as examples of imple­mentation at the national level (Chapter III); and control mechanisms at the na­tional, regional and international levels (Chapter IV).