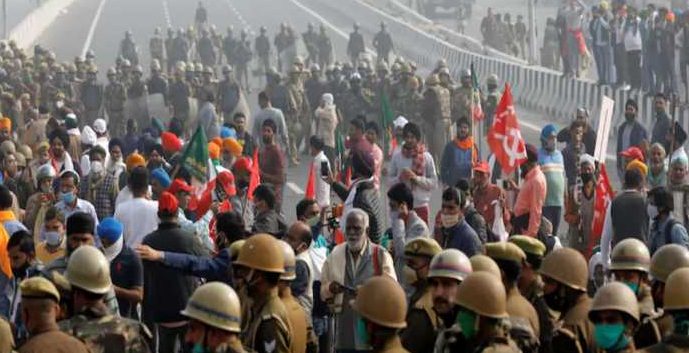 Geneva, 15th December 2020 – Over the last two weeks, India has been the scene of an unprecedented general strike. According to some media reports, it is believed to be the largest mobilization in the history of mankind: a human river of 250 million people, workers and peasants, hand in hand, marching on Delhi, the capital, to protest against new laws passed by the ultraliberal and reactionary government of President Modi.


Initially launched by the unions following the passage of an anti-worker law, the general strike quickly gained momentum as the country’s major peasant organizations joined the movement. The latter were mobilized against three bills opening up the agricultural sector to agribusiness and the interests of financial institutions.

Peasants in India fear, in particular and with good reason, that one of these laws will dismantle the minimum price system that has long provided them with stability by guaranteeing a fixed price at which the government buys certain products from them. This new law is thus part of the deepening of the neoliberal reforms initiated in the 1990s, especially since the “green revolution”. Reforms wanted by transnational agribusiness corporations, with the sole objective of crushing family farms in favor of highly intensive, mechanized and industrialized agricultural systems.

In this regard, we recall the importance of demanding the implementation of the UN Declaration on the Rights of Peasants, adopted in 2018, which calls on states to protect the rights of rural communities, to develop integrated and accessible agricultural systems based on food sovereignty and sustainable practices such as agro-ecology. It is a tool that reaffirms the need to recognize the importance of the place of family farming in the construction of a more egalitarian and sustainable world in the face of agricultural systems that destroy the social fabric and degrade the environment. It is more than necessary to take ownership of this instrument, to make it “a tool in the struggle for our common future”.

CETIM expresses its solidarity with the struggle of Indian workers and peasants for dignity, social justice and respect for the fundamental rights of peoples. The Indian government must respect its international human rights commitments, in particular the International Covenant on Economic, Social and Cultural Rights and the UN Declaration on the Rights of Peasants.

Read CETIM’s book “The UN Declaration on the rights of peasants. A tool of struggle for our common future” (free access to PDF and EBook version)