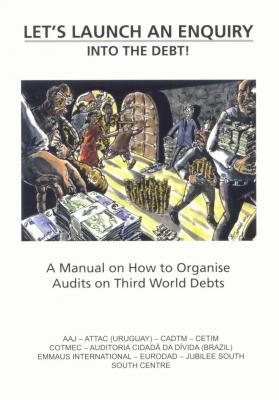 Let’s launch an enquiry into the debt! A manual on how to organise audits on Third World debts

This little guide is intended to serve as a support tool for such efforts and as a tool of popular education indented for social movements, citizen reds,
Members of Parliament, jurists, economists and other rebels.

If, for the creditors, the Third World debt can seem like a real gold mine, for the people living in the Third World, it feels more like a straight jacket. However the debt is a story… stories, very complicated, that can be entangled, unclear, and often very questionable…

What has happened to the money of this loan? Under what conditions was this loan contracted? What share has been misappropriated? What crimes have been committed with this money? Etc. A debt audit allows us to answer theses questions and others. We can begin to clarify the past, to untangle the web of debt, thread by thread. It allows us to reconstruct the sequence of events which have led to the present deadlock. And it enables us to avoid repeating the mistakes of the past.

This little guide is intended to serve as a support tool for such efforts and as a tool of popular education indented for social movements, citizen reds,
Members of Parliament, jurists, economists and other rebels.

This manual is the result of a joint initiative of CETIM and CADTM, with the support of the American Association of Jurists (AAJ) and the South Centre. It was written on the basis of two seminars that brought together Third World debt experts and activists. EURODAD, Emmaus International, Jubilee South, COTMEC, Attac Uruguay and Auditoria Cidadã da Dívida (Brazil) joined this initiative. The organisations mentioned above hope that the debt audits can begin as soon as possible in various countries so that the truth about the debt can finally be brought to light!

“We pledge to redouble our efforts to force changes in South government policies that should lead to the repudiation of debts claimed from our countries. We view the realization of debt audits as fundamental steps in that regard.”