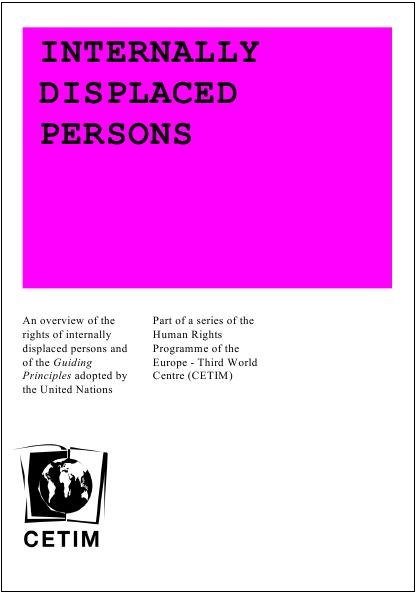 Although forbidden by international humanitarian law and defined by the Statute of Rome (the International Criminal Court) as a “crime against hu­manity” (art 7.2.d), forced displacements are still largely practiced in our time during armed conflict and in various …
Categories: Books, economic, social and cultural rights, human rights

Although forbidden by international humanitarian law and defined by the Statute of Rome (the International Criminal Court) as a “crime against hu­manity” (art 7.2.d), forced displacements are still largely practiced in our time during armed conflict and in various other circumstances (huge development projects, catastrophes etc).

The magnitude of this phenomenon has prompted the United Nations to re­act by creating, as the beginning of the 1990s, the post of Representative of the Secretary-General on Internally Displaced Persons, although some wanted to create a body comparable to that of the Office of the High Commissioner for Refugees (HCR).

Today there are some 25 million internally displaced persons in 40 to 50 countries, whereas the number of refugees has diminished, from 17 million in 1992 to 8.4 million in 2005.

The peculiar context obtaining after the Cold War certainly favored “the explosion of the number of displaced persons and the evolution of internation­al provisions”.

Those mainly responsible for and/or complicit in population displacements on a large scale are often governments or para-governmental groups and, in certain cases, non-governmental elements such as transnational corporations or armed opposition groups.

This brochure aims to explore the evolution of this concern and the meas­ures taken at the international level, in particular within the United Nations, re­garding displaced persons. It presents the mandate and the activities of the Representative of the Secretary-General on Internally Displaced Persons and the Guiding Principals that govern this question. One of the merits of the Representative is that he sets out the bases of the problem and acknowledges, without hesitation, that “internal displacement is not only a subject of preoccupation from the point of view of human rights. It is also a humanitarian, political and development problem”.
Three related initiatives from the now defunct Commission on Human Rights and its subsidiary body, the Sub-Commission for the Promotion and Protection of Human Rights, deserved to be mentioned in the framework of this brochure. They have been briefly presented in the annex.