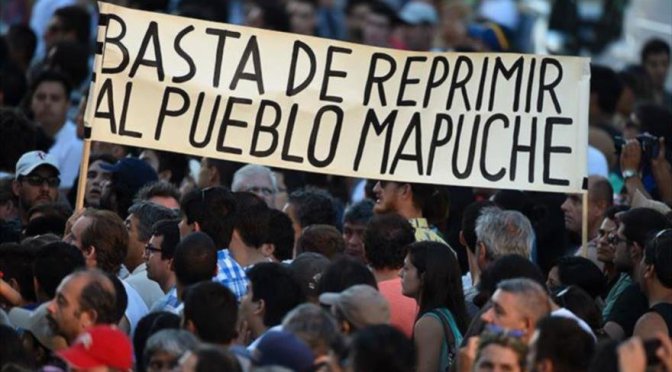 In the area of human rights, for more than twenty years Chile has been experiencing an increase in mobilizations of indigenous peoples for the respect of their rights to land, natural resources and recognition by the State.

The Mapuche people are directly confronted with the investment projects of transnational corporations in the hydroelectric and forest industry sectors.

During the 39th session of the Human Rights Council, the Special Rapporteur on the rights of indigenous peoples, Victoria Tauli-Corpuz, presented a thematic study on aggressions against indigenous activists.

She concludes in her report que

«large-scale development projects are the main factors driving the intensification of attacks on and criminalization of indigenous peoples. Frequent implementation of such projects must cease without genuine consultation and measures to obtain the free, prior and informed consent of the indigenous peoples concerned. »

The Europe Third World Centre, in collaboration with the Ethical Committee Against Torture and the Colectivo Nueva Generaciones Chile (New Generations Chile Collective), has presented a written statement on the phenomenon of the criminalization of the vindication struggles of the Mapuche people in Chile.

«The constant denial of the legitimate demands of the Mapuche people by forestry companies and the State has as a consequence the depredation of territorial spaces associated with the habitat necessary for the reproduction of the Mapuche culture, the indiscriminate exploitation of land and water resources, and a policy of criminalization with concrete processes of assemblies towards organizations and leaderships with the aim of disarticulating the Mapuche movement.»

The statement also mentions that the Chilean government uses an anti-terrorist law, inherited from the military dictatorship, to repress Mapuche leaders and criminalize the legitimate demands of its people. The Human Rights Council was informed that in September 2017 the anti-terrorist law was used to accuse the spokesman of the Arauco Malleco Coordination, Héctor Llaitul, with a montage of false evidence from the intelligence services about an alleged arms trafficking between Chile and Argentina.

Héctor Llaitul would have had to be in Geneva to present his case to the Human Rights Council, accredited by Cetim and invited by the Colectivo Nuevas Generaciones Chile, and meet with the Special Rapporteur on the rights of indigenous peoples. His passport application of July 30, 2018 has not yet been processed, his constitutional right of free transit was not respected. This situation was denounced in Cetim’s intervention on Wednesday, September 19, during the interactive debate with the Special Rapporteur.

On the same day, in the morning, Cetim intervened on the debate on the inclusion of autochthonous peoples in the Agenda 2030 for sustainable development. We expressed our concern that

«the Chilean State could withdraw from the Convention 169 (of the ILO), a decision that would represent a regression of the rights of indigenous peoples in Chile and Latin America. »

The criminalization of the legitimate demands of indigenous peoples, in the context of the struggle against the projects of transnational corporations, is a global problem that involves the responsibility of States. Chile is no an exception to this worrying phenomenon of aggression against the Mapuche people. The solution necessarily involves the search for political paths that involve all the actors in the conflict, including the unjustly stigmatized sectors.

We call on the Chilean government to ensure the protection of indigenous leaders, in accordance with international human rights commitments.