Jean Ziegler was the first UN Special Rapporteur on the Right to Food from 2000 and 2008. In this book, he explains to his grand daughter the world’s ” cannibal ” regime, the capitalist regime,  which according to him is the most unjust form of organization in the history of the planet, one that guarantees neither freedom nor well being of humanity. The author explains, in simple terms the birth of capitalism, the means of production and the kind of social organization. He covers all stages of its development : the enslavement of blacks, the serfdom of the Middle Ages, and under development.

In this book, Jean Ziegler also proposes tools for struggle. Indeed according to the author, utopia is a tremendous historical force, which is becoming reality one step at a time. Things that were thought impossible have been achieved after long struggles : the abolition of slavery, the emancipation of women in the West, or the setting up of systems of social security.

The text is also full of precise and concrete examples, often linked with current events.

It was published by Editions du Seuil, in Paris 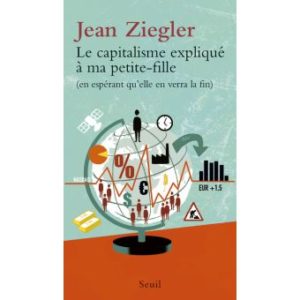