Corporate Impunity : 5th session of negotiations for the binding treaty on TNCs and human rights 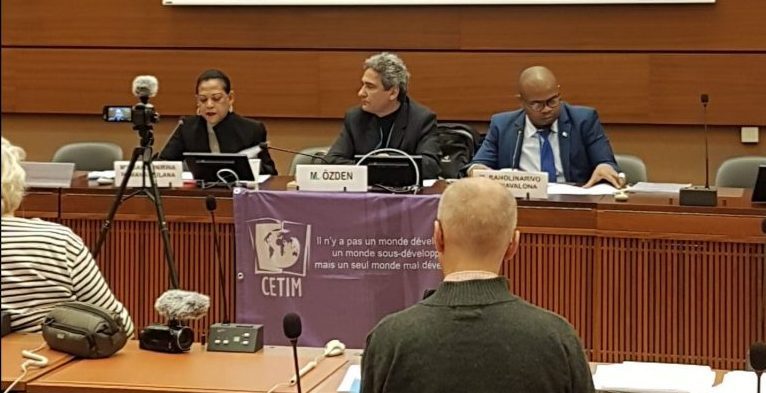 Information kit published by the Global Campaign to Reclaim People’s Sovereignty, Dismantle Corporate Power and Stop Impunity (Global Campaign), of which CETIM is the coordinator at the United Nations.

The 5th session of the United Nations Open-ended Intergovernmental Working Group (OEIGWG) mandated to elaborate a treaty on “Transnational Corporations and Other Business Enterprises in the Field of Human Rights” was held in Geneva from 14 to 18 October 2019. The process is at the heart of the negotiations. States and civil society organizations were called upon to discuss and negotiate a new revised draft treaty, presented by the Chair of the Working Group (held by Ecuador) in July 2019.

Highlights of the 5th session of negotiations of the UN legally binding instrument on transnational corporations and human rights :

– The content of the draft treaty deviates from the mandate of the working group (resolution 26/9).

– The draft text itself has gotten further away from core Global Campaign proposals. The Global Campaign will continue to act in the defence and improvement of key issues present in the Revised Draft. We hope that the future draft, will evolve into a document that reflects the fruitful debate of the last 4 years, with a special emphasis on the needs and demands of affected communities, whose suffering is the root cause for this process.

– Civil society participation was questioned by several states and successfully defended by civil society delegates and also by other states.

– Negotiations have reached a new point of maturity and strength with a significant number of states participating substantively with concrete text proposals.

– Following numerous criticisms from civil society and many States, the Presidency is to rework the draft treaty, accompanied by a document on key elements, which it is to present to the 6th session of the Intergovernmental Working Group (October 2020).

Several members of the Global Interparliamentary Network for a binding treaty where also present during the V session of negotiations. See the list of signatories:  http://bindingtreaty.org/

As a reminder, the mandate of the Intergovernmental Working Group to elaborate a legally binding instrument on transnational corporations and human rights derives from resolution 26/9 adopted by the Human Rights Council in 2014. Official page : https://www.ohchr.org/en/hrbodies/hrc/wgtranscorp/pages/igwgontnc.aspx

PDF of the CETIM publication “Transnational corporations’ impunity” in English